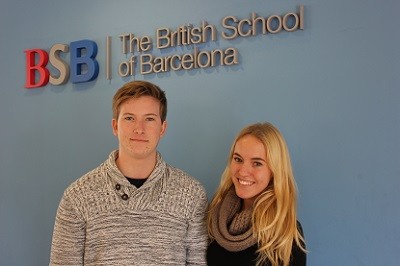 The 2014 Headmaster’s Essay Prize has been jointly awarded to two students in Year 13, Ida and Stefan, for their outstanding achievement in academic research.

This year’s edition was enthusiastically received by our Sixth Formers, who submitted as many as 20 high quality essays after the summer holidays which were based on different research fields in both the Humanities and Sciences. They looked into various topics ranging from immortality to Egyptian mythology, Freudian psychoanalysis, renewable energies, network marketing, economic models and alternative medicine, among others.

Ida’s winning piece on “The impact of management styles on organizational freedom and employee satisfaction” delves into several Business Administration aspects such as organizational freedom, scientific management and statistical analysis as well as employee engagement and satisfaction. She decided to conduct this research in order to support her UCAS application, as she was thinking about studying Business Administration at the time even if in the end she would like to complete a degree in Art & Film in Denmark out of her growing interest in Art, one of her current A levels. Ida has been at the BSB since Year 5.

The joint winner, Stefan, wrote an essay on “The environmental and health implications of nanotechnology”, which focused on areas such as carbon nanotubes, manufacture of nano-products, nano-filtration, renewable energies and the grey-goo scenario. His piece is connected to the Chemical and Nuclear Engineering undergraduate degree he has applied for at top UK universities, including Cambridge and Imperial College London. Stefan, who was born in Rio de Janeiro, has been with us since Year 7.

In addition to these two extraordinary pieces of work, the assessment panel has highly commended two further essays, namely Hermínia’s “Coexisting with technology: does it control us?” and Nerea’s “The influence of renewable energies on electricity prices in Spain”.

The British School of Barcelona would like to thank Year 13 pupils for their participation in the prize.

About the Headmaster’s Essay Prize

The Headmaster’s Essay Prize is an annual award rewarding intellectual curiosity and original thinking. It was established in 2011 to promote independent learning and broaden research-based skills such as data collection and interpretation, conceptual thinking, critical analysis and synthesis, logical reasoning and report writing. Applicants are requested to submit an original piece of research and list their sources using an internationally-recognised citation system. All essays are judged by a specialist panel chaired by the Headmaster.