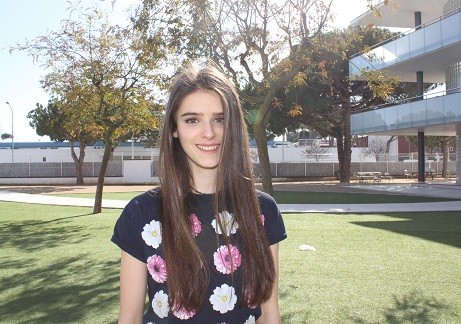 We are delighted and very proud to announce that Claudia, one of our gifted and talented students in Year 12, has been recently granted the Bronze Award for the British Physics Olympiad Experimental Project 2014. Claudia has been awarded this prize for her outstanding paper “Gravitational Assist Slingshot Experiment” in the Experimental Project, an annual Physics competition that gives students hands-on experience of how experimental research is carried out.

Claudia’s experiment was based on a problem posed by the committee, which she had to investigate using common household and school equipment. She then had to write up the project in the style of an academic paper and report her findings.

Abiding by the report guidelines, Claudia introduced her research project with a full but concise description of the experimental procedure she had applied. To this respect, she described the background provision for the experiment, and outlined some precautions to take and any difficulties encountered. She then presented her study results with tables, units, graphs and images to illustrate her findings. She concluded her experiment with a discussion of results, units and accuracies with special emphasis on the reliability of the final results, both considering uncertainties and pinpointing potential areas for reliability improvement.

Claudia explained that she had learnt about this Experimental Project from Mr Wood, her Physics teacher. She then decided to enter the competition, because “I would like to study Aeronautical Engineering, and I thought it might contribute to add value to my UCAS application next year. I believed it might help me develop some of the skills which are required when writing the statement for admission. Even if I didn’t win.” Claudia is currently in Year 12, working hard on her A Levels (Physics, Maths, Further Maths and French). She plans to apply for several universities in the United Kingdom, such as Bristol College, University of Bath and Imperial College.

Ms Mulhall, Head of Science, stated: “We are extremely proud of Claudia’s achievements in Physics for a number of reasons, starting with the fact that she is a girl succeeding in the male-dominated world of Physics.” She also added: “Mr Wood (Science, Physics & Maths Teacher) and Mr Bell (Physics Teacher & Examinations Officer) should also be commended for introducing her to it and providing a very high level of skills to their pupils.”

The recent landing of the Philea probe on the Comet ´67P Churyumov-Gerasimenko´ has reinforced the importance of understanding gravitational assist for modern day space missions. Since 2004 the Rosetta craft carrying the probe performed 3 separate ´slingshots´ around the Earth to catch up with the comet travelling at 135,000 km/h. This experiment investigates a simplified version of the theory. A tennis ball is dropped on top of a football, when the balls bounce, the tennis ball gains energy from the rebound of the football, greatly increasing the height and velocity of its rebound.

About the British Physics Olympiad

The British Physics Olympiad (BPhO) is hosted by the University of Oxford and supported by the Ogden Trust and the Institute of Physics. It is run by five committee members and volunteer physics teachers and academics from across the country. It aims to encourage the study of Physics and recognise excellence in young physicists through five stimulating annual Physics competitions: The British Physics Olympiad, A2 Challenge, AS Challenge, Physics Challenge and the Experimental Project. The Experimental Project, introduced in 2007, is addressed to students in Years 10 & 11 and Years 12 & 13. It was developed to support and encourage practical physics students in school. The prizes consist of certificates and books.