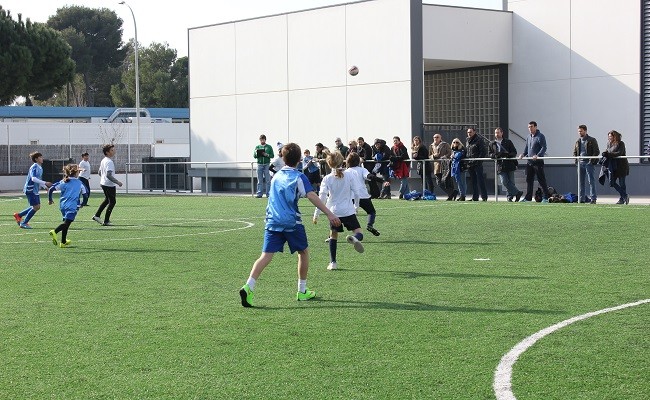 Each school took part in the tournament with two teams (10 players per team): one Benjamin category (8-10 years old) and one Alevin category (10-12 years old). As the American School of Barcelona was represented by an Alevin team only, the BSB entered 2 Benjamin teams.

It was an intense morning that brought together 100 players and much of the BISA school community of Barcelona in an atmosphere of friendship, fair play and fun. A total of ten matches were played for each age group, each team playing 4 games. There was an awards ceremony at the end where both the winning teams and also the runners-up received trophies from the BSB Headmaster:

The tournament was jointly organised by Mr Wallace (Secondary PE Teacher) and Mr Roberts (EY & Primary PE Teacher). Other BSB teachers also volunteered to help with the teams and scoring.

Mr Wallace said “The BISA sports organisation is a new initiative to bring together in competition and cooperation all of the independent international schools from the Barcelona area. This is the first large scale tournament of its kind and we are hoping to develop the programme into a full range of sports activities and possibly other ways we can cooperate in unison.” He added “The purpose is to forge relations with the BISA schools and allow participation opportunities for all students“.

When praised for this successful edition, Mr Wallace was eager to comment: “This was our first ever BISA tournament held at the BSB and we’d like to hold more in the future, possibly an annual tournament”.