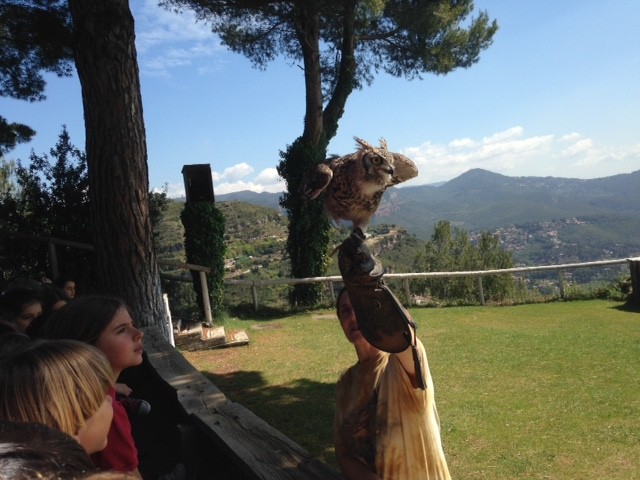 Last Thursday Year 4 students went on a trip to Cim d’Àligues, a unique centre in Sant Feliu de Codines devoted to the conservation, breeding and flight exhibitions of birds of prey.

It was the first time the BSB visited this complex and Year 4 decided on this place in order to support two of their recent science topics – Animals (Including Humans) and Habitats. The aim was to familiarise the children with food chains, how animals adapt to their habitat and why they live in certain places; also to look at diets and how the bird’s features help them hunt and eat, while looking at carnivores and herbivores.

It was a remarkable BSB expedition of 77 children, with 4 teachers and 6 parent helpers that lasted for about four hours.

First the students went on a forest walk to look for signs of animals. Then they were shown all the birds of prey in their cages, where they learnt about the characteristics and peculiarities of each species of these amazing birds (eagles, owls, falcons, vultures, hawks, secretary bird, among many others).

Finally they had an hour-long bird show where they sat in an amphitheatre while the birds came on one by one, flew around with their trainers, and ate their prey. The flight session was conducted at a natural viewpoint, located near the edge of a cliff, which made it even more spectacular. The children were able to see all the birds up close as they were shown around. At the end, about 30 different birds of prey were all flying around at once while children had to be very quiet and weren’t allowed to touch the birds.

Mr Antcliffe was very pleased: “We really had a brilliant time. The children absolutely loved this spectacular bird show at the end, especially as the birds flew over their heads, wings skimming their hair and faces! It was amazing!” He also added “Some of the children said it was the best trip they’d ever been on!”

This activity was also meant to achieve greater sensitivity and respect towards nature by focusing not only on the study of birds of prey, but also pointing to the other elements that make up the ecosystem, and to their interactions.