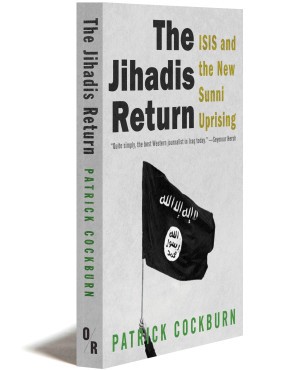 On Tuesday 5th May, Mr Petrie and the Year 10 History Group attended a fascinating talk by renowned journalist Patrick Cockburn at La Pedrera, on the rise of ISIS in the Middle East. Mr Cockburn has been reporting on the area for various publications, most recently The Independent, since 1979 and he spoke with great authority and objectivity on the dangers of being a war journalist and the emergence of ISIS as a force following the regime changes in Iraq and Libya.

Patrick Cockburn’s “The war and the Islamic State” lecture was one of the “Ideas and the world” cycle of conferences jointly organised by the Fundació Catalunya-La Pedrera and the CCCB with the aim of bringing the experience and voices of outstanding thinkers closer to both adults and children. This lecture on Tuesday was specially intended for groups of Secondary students from Year 10 to the second year of Sixth Form, hoping to challenge assumptions, refuse to accept the world as it is and champion thought, whether it is philosophical, scientific, literary or artistic, as the main tool for understanding and giving shape to the reality that surrounds us.

The packed audience responded with an hour´s worth of questions and the BSB students left with a far greater understanding of what is taking place in this region of the world, and why.

Many thanks to BSB parent Lluís Farrés for inviting our students to this event.

Patrick Cockburn is an Irish journalist who has been a Middle East correspondent since 1979 for the Financial Times and, presently, The Independent. He has written several books on Iraq’s recent history as well as a memoir, The Broken Boy and, with his son, a book on schizophrenia, Henry’s Demons, which was shortlisted for a Costa Award.

He is the author of The Jihadis Return: Isis and the New Sunni Uprising, his latest book, where he analyses the unfolding of one of the West’s greatest foreign policy debacles and the rise of the new jihadis.

He won the Martha Gellhorn Prize in 2005, the James Cameron Prize in 2006, and the Orwell Prize for Journalism in 2009. He was also awarded Foreign Commentator of the Year at the 2013 Editorial Intelligence Comment Awards.