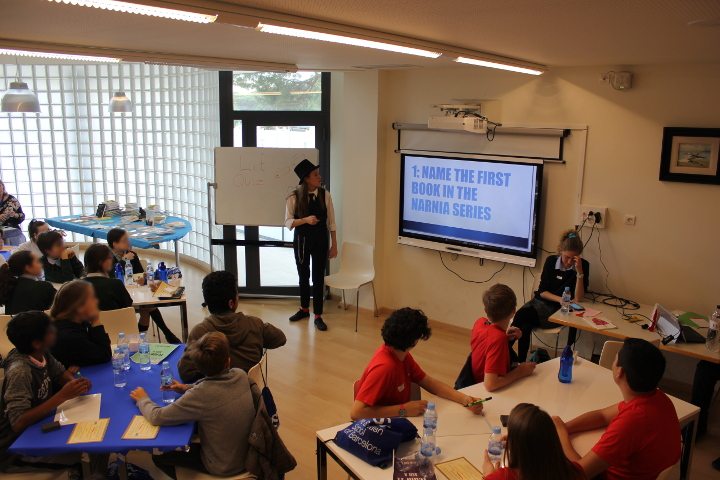 On Thursday 8th March, 2018, the BSB was delighted to host this year’s BISA (Unofficial) Children’s Lit Quiz at the Castelldefels campus for the first time. 7 Barcelona schools represented by 13 teams participated in this fourth edition, where 52 eager literary buffs across Key Stage 3 shared and celebrated their love of reading and literature.

The Lit Quiz was led by Director of Learning English and Languages, Ms Kelly, and Mr Mistry, with a team of BSB English teachers as judges: Ms Ewbank, Ms Rai, Mrs Petrie and Ms Duarte. They were supported by a team of enthusiastic Year 10 organizers and tour guides: led by Francesca, ably assisted by Kate, Laura, Juan and Julia. Alex, Year 11, was our passionate host and quiz master!

The BSB participated with two teams:

The quiz consisted of 70 questions in four linked rounds on Children’s and Young Adult Fiction. The twelve teams were sat in their teams and had 15 seconds to write down their answers on white boards.

Year 11 Alex hosted the quiz in her own idiosyncratic style, running the rounds and giving feedback to the teams, channeling her own take on Willy Wonka (think more Gene Wilder than Jonny Depp!). This was her fourth year of involvement with the quiz and she was a charismatic inspiration to the BSB teams in the run up. The event was won by Kensington School by the narrowest of margins: one point on 42. BSB came joint second with Benjamin Franklin International School on 41.

This yearly event encourages students to read widely and share their recommendations. Originally run as a lunchtime club, this year lit Quiz became a society on Wednesday afternoon. With the all-girls team all-conquering last year, Ms Kelly was delighted when five enthusiastic Year 7 boys made the final teams this year. There is a strong sense of building a team for the future and they all promise to be back and even better next year to reclaim their literary crowns, when the event is hosted at Kensington School.

Students were so proud to be hosting at their own school and had a thoroughly enjoyable day. Although the competition was fierce and they would have liked to win, they understood how healthy it is to have new teams coming through with which to compete in future years. When comforting Leo in Year 7 about coming second, Alex had some excellent advice: ‘In my first year, my team did not place, the next year we came third and last year I captained the winning team. One year later and I’m hosting the whole quiz! You just have to bounce back and keep competing. Besides, it’s not so much about winning but celebrating our love of books and making new friends across year groups and across the different Barcelona schools.’

Ms Kelly said, ‘It was great fun to host the quiz this year as all the BSB students involved were incredibly proud of showing off their school site and library. I couldn’t believe the professionalism of the Year 10 students who helped me organise and run the day, from gathering quiz questions, to compiling lists, to running tours and ultimately hosting the day, they were a dream-team. A huge thank you to the BSB English teachers, particularly Mr Mistry who provided all the ICT support leading up to and on the day. Finally, hats off to Alex who did a superb job as quizmaster and compère, her high energy and infectious enthusiasm for all things literary was appreciated by teachers, librarians and quizzers alike. Of course, we must congratulate our two teams who represented the school so well.’

We would like to thank all the participating schools for their bonhomie on the day and also the Quiz sponsors, Come In Books and Bookbox International, for donating the prizes for the three top ranking teams.

Stay tuned to Ràdio Castelldefels 98.0 FM! Following the well-received radio interview about the quiz and their love of reading, Alex, Francesca, Daniela have been invited to contribute to a radio show, called ‘The Experts Club’ in April. More to follow! Listen to full radio podcast here.