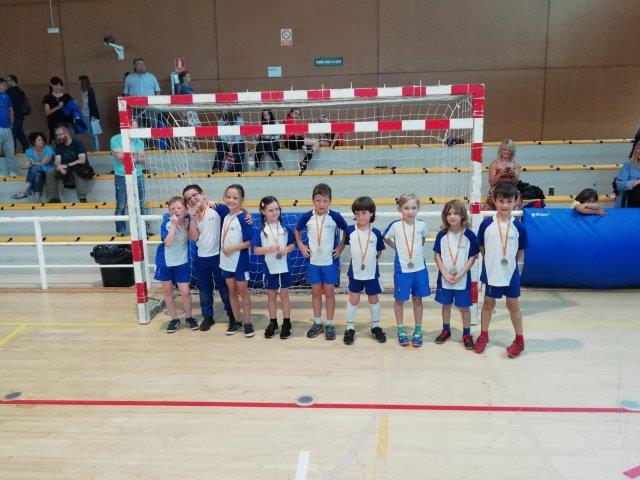 The Alevin team competed against several teams that train regularly together and participate in league fixtures and as such it was a somewhat challenging event. However, collectively they produced some great attacking play but were perhaps a little ´gung ho´ in their approach and as such were left exposed in defence.

Our Benjamin team once more performed fantastically well, winning four of their five fixtures. The teamwork and effort shown by all of the players was excellent and they showcased great flair when attacking and worked as a unit to nullify the opposition in defence. Mr McLachlan, their teacher, said, “I was delighted to see the team rewarded for their play and attitude, coming first place in their category and obtaining another fair play trophy”.

It was a very different tournament on this occasion for our Pre-Benjamin players. Although they lost their first game against a strong Les Costrets side, they regrouped and performed magnificently together for the remaining two fixtures, scoring countless goals and showing a skill-level beyond what is expected of players of their age. Mr McLachlan explains “It was lovely to see that there were a number of new participants at the event and I will certainly be ensuring that they continue their engagement with the sport. Particularly, as they were rewarded with the runners-up fair play award also”.

Mira, pupil from Kandinsky class said, “I definitely want to take part in a handball tournament again as it was super fun!” Once again, it proved to be a very rewarding and enjoyable tournament for the BSB Sitges and we cannot wait to further progress our pupils’ talents in the sport next year.

The BSB handball team is growing fast and we expect to continue to do so in the future!