Home The British Ambassador visits the British School of Barcelona

The British Ambassador visits the British School of Barcelona 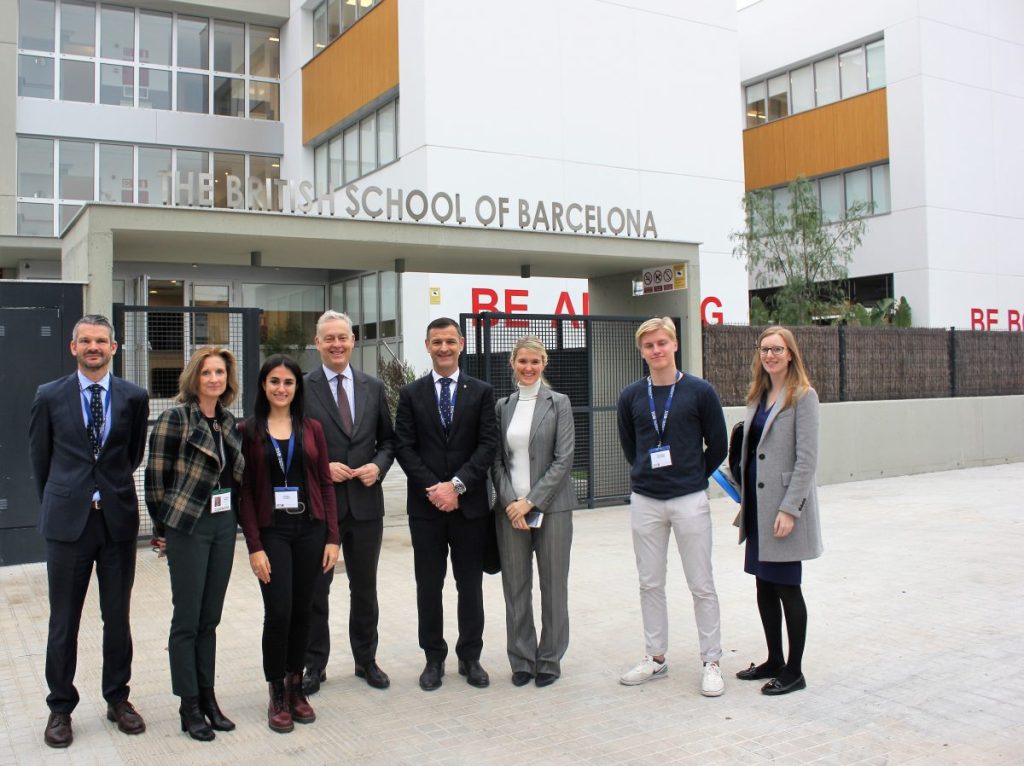 The British Ambassador to Spain and Andorra, Simon Manley, visited The British School of Barcelona on the 13th of December, 2018, to witness first-hand the improvements the school has gone through during its 60 years providing a British education to students aged 3 to 18 years old. He was joined by the Second Secretary Political at British Embassy Madrid, Lorna Pugh, and the Vice Consul at British Consulate, Annabelle Sproat, who had also visited the school last May to celebrate the inauguration of BSB Nexus, the new pre-university campus for Sixth Form students.

Led by the school’s Principal, Jon Locke, the Chair of Governors Cognita Spain, Fidelma Murphy, and several key members of the school’s Senior Leadership Team, the British Ambassador had the opportunity to visit the two BSB campuses in Castelldefels. Since 2016 the school has a third campus for Early Years and Primary in the neighbouring town of Sitges. Altogether, the three campuses have over 1,500 students.

The members of the diplomatic corps had a guided tour of the Primary and Early Years facilities with the two Primary House Captains. At the school’s new Innovation Centre (an open and flexible space completely redesigned for 10-year-old students), the ambassador talked with the students and learnt how this unique environment allows them to work collaboratively with a project-focus approach, thus enhancing personal skills, such as initiative, leadership, creativity, and innovation. The ambassador also answered some of the students’ questions about his profession and the many commitments of his daily agenda. He highlighted the importance of teamwork and having an excellent team, as well as the ability to engage in social relationships.

The group then toured the Secondary facilities led by the two Pre-University Scholars, and visited the classrooms, the Library, the Theatre, and the spacious sports facilities, including the football field. The ambassador was able to see, from the students’ point of view, how the British National Curriculum is taught, how they access the learning resources, and how the school is implementing Digital Transformation.

The tour ended at BSB Nexus, barely 100 metres away from the main campus, where the ambassador learnt about its distinct educational model that not only educates students aged 16 to 18 academically but also helps them develop 21st century skills, including critical thinking, emotional intelligence, communication, and teamwork, to meet the demands of a fast-changing world.

Throughout the whole visit, Simon Manley expressed a keen interest in talking with the students, and learning how they work in the classrooms and what their career expectations are. The ambassador pointed out the quality and extent of The British School of Barcelona’s facilities, and was greatly impressed by the enriched curriculum, buzzing with activities and projects that help students raise their personal profile in preparation for University.