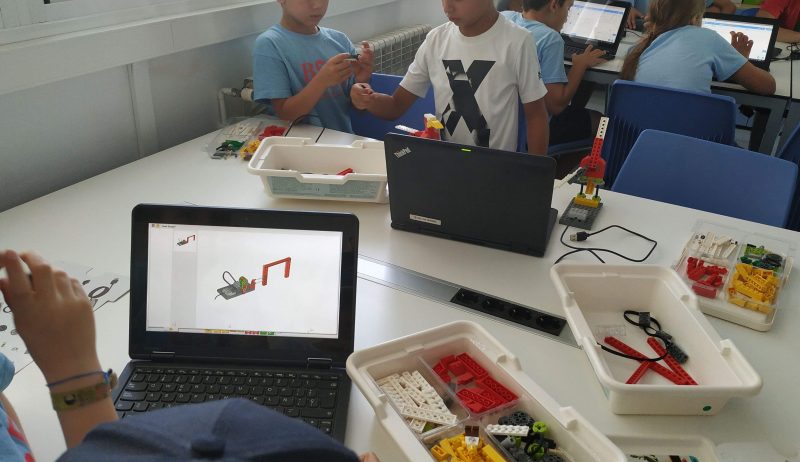 This summer, at The British School of Barcelona expanded we have expanded our summer camp offer with a groundbreaking 4-day-long Summer STEAM Camp in English, which we carried out in partnership with IGNITE Serious Play, a company specialised in STEAM activities.

Directed at students aged 5 to 15, the new Summer STEAM Camp’s goal was to teach students new STEAM skills through engaging and creative projects based on the values of the Tokyo 2020 Olimpic Games, working with different ‘MAKER’ tools, such as Robotics, Coding, 3D Design and Virtual/Augmented Reality.

The summer camp took place in BSB Castelldefels and it was a great success; the students did not want to miss a single second of it! We have spoken to the IGNITE Serious Play team, asking them to tell us the details of such a positive and enriching experience which helped develop several STEAM skills:

“The entire week was designed, planned and organised with the Tokyo 2020 Olympic Games in mind. We then created three work groups according to the students’ age in order to adapt the activities to their playing and learning needs.

We had a pre-school group where children were introduced to the world of robotics and coding based on emotion identification sequences, needs analysis, and solution proposals.

Using LEGO pieces, they built a setting for the Olympic Games, creating Castelldefels, Tokyo and the Olympic Stadium. They were introduced to coding using small robotic caterpillars and bees travelling from one setting to another, and they were also introduced to a new culture, Japan, getting to know their customs and culture.

They also built crossbows, cars and even dragons using small mechanisms which became part of little Olympic challenges and the most fun rúa olímpica. The children were proud to show their creations to older students across the school.

The Primary work group focused in recreating the famous Pong game using Scratch. The goal was to create an Olympic pong competition, where students could develop their coding and software skills, teamwork, positive competition, communication and leadership skills.

In this second group, students had the opportunity of working with makeys, developing their most creative and artistic side, and with motorised machine boxes to develop their building and spatial vision skills. All these skills were developed in a creative and competitive context in the same spirit as the actual Olympic Games.

The group with the oldest students dedicated this week to working in coding and 3D design skills, always following the theme of the Tokyo 2020 Olympic Games.

We started the week focusing on coding, building “Mbot” robots and learning their basic functions in order to quickly move on to using them during the week for racing and even football matches for robots! This activity was so popular among the students that they kept organising robot matches during break times throughout the whole week, attracting pubic and participants from the younger groups.

Also in the context of 3D design and coding, this work group used the “Co-spaces” platform. They designed an interactive Olympic Games museum after an initial analysis and research stage. The museum was adapted to be visualised as a tour using virtual reality glasses and it was afterwards shared with their classmates and the youngest students that attended the last day of SummerCamp, enjoying their 3D and VR works.

In the context of 3D design and Co-spaces, the students also created digital parkour circuit, coding in timers, forbidden zones, obstacles and other interactive elements, creating a project which many students dedicated a lot of time to, even from home!

The students in the third group had the opportunity of developing their creative and artistic side through 3D design and printing using the TinkerCad tool. Students could then design 3D olympic medals, rings, commemorative statuettes, etc, which they took homes as Olympic prizes at the end of the STEAM CAMP.

All in all, it was a great week during which children enjoyed, learnt and developed several skills in the most fun way: by playing!”