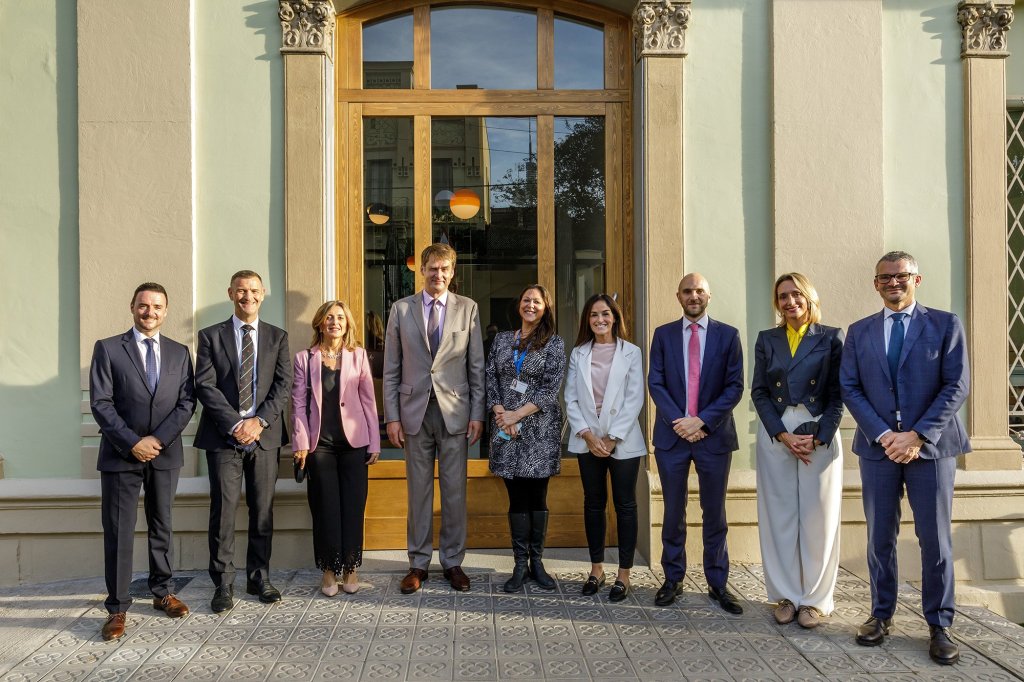 On 5th October Hugh Elliot, British Ambassador to Spain, visited the facilities of BSB City, the new campus of The British School of Barcelona, which recently opened in the heart of Barcelona. The diplomat had the opportunity to enjoy a guided tour of the Foundation Campus, which is located in a Modernist building with capacity for up to 200 students aged 3 to 10 and has 500 square metres of outdoor learning areas and 750 square metres of indoor spaces with natural light. The new BSB City project is the result of an investment of 15 million euros by the international education group Cognita —of which BSB is part—, with 87 schools in 12 countries in Europe, Latin America and Asia.

The British Ambassador to Spain was accompanied by Director of Trade and Investment DIT Barcelona, Paul Clark, as well as the Director and the Barcelona Region Vicepresident of the British Chamber of Commerce in Spain, Eva Prada and Isabel Perea. From the school, the Ambassador was joined by the Cognita Head of Marketing and Admissions Spain, Beatriz Sanmartín, BSB Executive Principal, Jon Locke, the Headteacher of the Foundation Campus, Katherine Monaghan, BSB Senior Business Manager, Dominik Anke, and the Headteacher of Secondary and Pre-University, James Petrie. During the tour, the ambassador was able to visit the highly creative and innovative learning spaces of the centre, which have been purposely designed with the development of student independence in mind. The goal is for students to grow to become the very best version of themselves, by equipping them with the skills they need to thrive in today’s society and become citizens of an ever-changing world; all this being the essence of a distinctly ‘BSB education’.

In the words of Hugh Elliott: ‘The United Kingdom is proud to see our family of British schools grow all over the world, and to be able to offer the National curriculum in England to more than 65,000 students who receive a British education in Spain. I am personally delighted to welcome this new campus of The British School of Barcelona in the capital of Catalonia, a fine example of BSB’s excellent work for over 60 years.’

The Ambassador added: “It’s really nice to see how Cognita Schools is developing in Spain and particularly in Barcelona. It’s great to see what you are doing here. It’s absolutely fantastic and I wish you all very well“.

BSB Executive Principal Jon Locke, added: ‘We are honoured to welcome the British Ambassador to our new BSB campus in Barcelona, a welcoming learning environment designed according to our standards of a high-quality education at BSB and Cognita. On behalf of Cognita, we would also like to take this opportunity to thank the ambassador and the British Chamber of Commerce in Spain for their task in promoting bilateral relationships between our country and the United Kingdom, particularly in the field of education. The initiatives and agreements between both countries allow our students at BSB—as well as thousands of students at other Cognita Schools in Spain—to receive a first-class, international education and develop the skills required in today’s world.’

Isabel Perea, Barcelona Region Vicepresident of the British Chamber of Commerce in Spain, highlighted the opening of the new school in Barcelona as ‘a further step in support of British education that will foster talent development in the city.’ She also thanked Cognita for their trust in the institution, as ‘their presence allows us, as an organisation, to understand better the concerns of the education sector.’

The recent opening in September of the Foundation Campus for Early Years and Primary students in Sarrià-Sant Gervasi is part of BSB City’s spectacular expansion project for the 2023/2024 academic year. The new building, located within walking distance of the current one, will offer an all-through, first-class international education. The registration period for both the Foundation Campus and the new building has already started and will remain open throughout the year.

With 5,500 square metres of indoor spaces and 1,200 square metres of outdoor spaces, the main campus, which will open in September 2023, will have a capacity for 750 students aged 3 to 18. Upon reaching Pre-University education, students will be able to choose between the British Curriculum along with the validation of Spanish certificate, or the International Baccalaureate, the same educational offer as the school currently offers at their Pre-University campus BSB Nexus in Castelldefels.

This expansion is part of continuous development plans of the school, which will also open a new state-of-the-art STEM Centre for Sciences, Technology, Engineering, and Maths in Castelldefels. With the opening of BSB City, The British School of Barcelona now has four campuses in Catalonia, joining the two campuses located in Castelldefels and the campus located in Sitges. In total, the school hosts 1,600 students of 60 different nationalities.

BSB will open a new campus in Barcelona city

The British Ambassador visits the British School of Barcelona