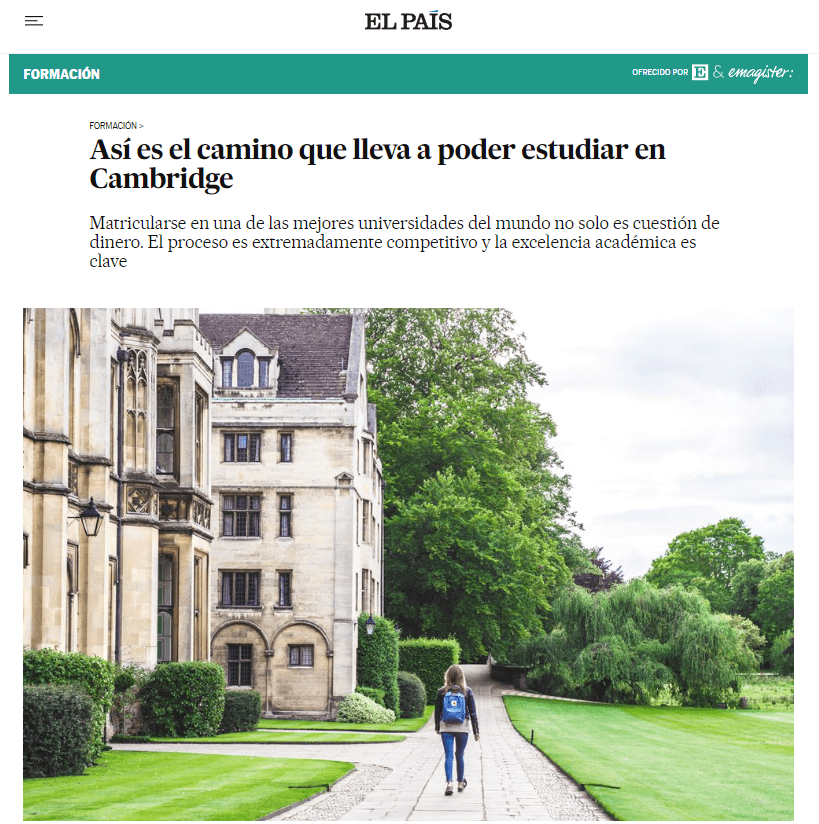 Following the recent release of the Outstanding Learner Awards issued by Pearson Edexcel that feature the Highest Marks achieved by a number of BSB students in a range of subjects every year, Spanish newspaper El País showed an interest to report on the journey of BSB Alumni who after sucessful application are now taking courses at Cambridge.

One of them is Matteo, former student at The British School of Barcelona who now studies Mathematics with Theoretical Physics at Cambridge. Matteo achieved the highest mark across Europe for Pearson Edexcel Further Mathematics A Level. ‘The application process is rather lengthy and includes a cover letter, an entrance exam, and an interview. The real work, however, is done before you apply, because you have to build your CV around what Cambridge likes’, he tells El País. ‘In my case, for example, I decided to apply when I was in Year 10, and from there I started reading maths books and taking part in competitions to show, in a tangible way, that I really like maths and that I’m passionate about them’.

The Cambridge academic model encourages independent study and personalised attention to students in tutor groups that bring together a small group of students several times a week. ‘As a humanities student, writing essays of around 1,500-2,000 words constitutes the vast majority of work, which involves extensive readinginto the question, research, and pulling ideas together’, says Jude, a Cambridge History and Political Science student who achieved the highest mark in Europe in his Political Science A Levels at BSB. ‘Contact hours are limited to a few lectures a week and twelve intensive supervisions in the eight week term where ideas in the essay are discussed to a high level and general feedback on the essays is given’.

Signing up in a degree at Cambridge University is a process that starts with UCAS. Applicants must complete an application form, which includes a letter of motivation and their Pre-University academic record, and choose up to five different universities. ‘Cambridge does not have a separate system or process, but it does have additional steps, as most degrees require a specific entrance exam and at least one interview’, explains Sam Twells, Admissions Manager for Europe at Cambridge. ‘Some degrees are very competitive and the test serves as a filter to decide who will go through to the interview stage’.

Claudia, a fourth-year Medicine student at Cambridge, who studied at BSB and achieved the Highest Mark in Spain in Biology A Levels, followed this process to the letter: after successfully passing the Biomedical Admission Test (BMAT), she underwent three interviews with five different teachers. ‘The BMAT was made up of three sections: one tested your cognitive skills, another tested your scientific knowledge, and the last was an essay’, she says. ‘In the interviews, I was asked complex questions where I had to explain my thought process to reach a conclusion’.

Part of this success comes down to our dedicated Futures and Careers team, who work with individuals from very early on to create their personal pathway. Students are guided through the different stages of the application process and provided with all the relevant school documentation to complete this. ‘University guidance and information about possible future study starts when students are around 15 years old, with visits from Universities to BSB and key input in tutor time and assemblies. When the students move into Pre-University, they receive weekly input and guidance on the university opportunities available to them and also on how to navigate the application processes. We have a dedicated Futures Team, whose job it is to provide this individual attention and they also organise the weekly visits from Universities from all around the world. Alongside this we run a special support group with an outside consultant for early applications to the top universities. This group will have specialist input on entrance exams and interview techniques as well as practice interviews and first-class guidance on putting together the crucial Personal Statement (cv). We are fortunate to have several parents in top academic positions who give excellent advice and we work with another outside agency to help get our top sports people scholarships at leading US universities’, states James Petrie, Headteacher of Secondary and Pre-University at BSB Castelldefels and BSB Nexus.