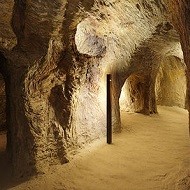 Our pupils in Year 7 participated in two educational outings related to their History syllabus on the 10th of December.

One group visited the Gavà Mines Archaeological Park to wrap up this terms’ topic, “Prehistory: the Neolithic”, so that they could add to the class theory hands-on activities in one of the most relevant and unique heritage sites in Spain. First, a film introduced them to this exceptional mining site and its main activity, the extraction of Variscita, a green coloured mineral which was used to make jewels. Then, on to the Museum where they could learn what life was like 6,000 years ago, and comprehend the life system and beliefs of our ancestors, thanks to the sizeable portion of the original artefacts on display. To enhance further awareness, children took part in a workshop. In groups they had to find out which objects belonged to the Neolithic period: food, animals, tools, metals… They also had to distinguish bones from men, women, young infants or elderly people, and try to explain why. Then, inside the mines, with a helmet on, they familiarized with the geology, mining technology and the late use of this archaeological site discovered back in the 70s. As they had already studied this period, they could all follow the explanations without difficulty and have a great time.

The other group visited Castelldefels castle as next term they will be exploring Norman castles. This term they have already studied the Norman conquest of England, and the trip was intended to show them a contrast between local and global defence strategies in the medieval world. The students were given an overview of the history of the castle and a tour of the grounds. They were shown how the castle is strategically placed and how the castle was built specifically with defence in mind. This will be invaluable for the students as they observed first hand a primary source to show them what life was like at those times and how castle construction progressed. The children were incredibly enthusiastic, with the boys in particular bombarding their guide with questions about how to destroy a castle! The tour lasted an hour and a half, followed by a beautiful picnic in the castle grounds. Afterwards our troops headed back to the school in time for afternoon lessons.